The spin axis of the Moon is tilted by only 1.5° (compared with the Earth's 23.5°), leaving some areas near the poles in permanent shadow, while other nearby regions remain sunlit for the majority of the year. Theory, radar data, neutron measurements, and Lunar CRater Observation and Sensing Satellite (LCROSS) observations suggest that volatiles may be present in cold traps in permanently shadowed regions. Thus, areas of near permanent illumination are prime locations for future lunar outposts due to their benign thermal conditions and near constant accessibility to solar power.

One of the primary scientific objectives of the Lunar Reconnaissance Orbiter Camera (LROC) is to unambiguously identify regions of permanent shadow and near permanent illumination using its two imaging systems that provide medium and high-resolution views of the poles. While in a 50-km polar orbit (September 2009 to December 2011), LRO acquired thousands of Wide Angle Camera (WAC) images of each pole every ~2 hours. Occasional spacecraft and instrument disturbances caused some imaging opportunities to be missed, however the average time between WAC observations remained at 2.3 hours.

When LRO passes over each pole, the WAC images from 80° to 90° on the dayside and back to 80° on the night side. The WAC 90° field of view (monochrome mode) allows for a 104-km region within 2° of the pole to be acquired at a resolution of 100 m/pixel. Speyerer and Robinson (2013) compiled these images into a year-long illumination movie in order to identify regions near each pole that remained illuminated for a majority of the year.

As part of this Reduced Data Record (RDR) product, we have included 8109 WAC images of the north pole acquired between 2009-09-23 and 2011-12-11. Each file is named with the following pattern: WAC_MOVIE_[N|S]YYYYMMDDThhmm
where:

The times used in the naming scheme are the start times of the WAC observations in UTC. All north pole products are map projected in polar stereographic with the center latitude of +90° and center longitude of 0° sampled at 100 m/pixel covering +80° to +90&deg. A LOLA shape model (Smith et al. 2010) was used to remove mapping distortions due to topography. Each WAC image was processed using the latest camera model available (Speyerer et al., 2014) with improved spacecraft ephemeris provided by the LOLA/GRAIL team (Mazarico et al., 2013). The image header includes the mapping information, start and stop times, along with the WAC image name used to make the individual product.

In addition, we have compiled QuickTime (.mov) and MPEG-4 (.mp4) movie files using 4124 WAC images acquired between 2010-04-22 and 2011-06-13. This time period is ideal, since there are not many long temporal gaps between WAC observations. The movie files are available in two sizes: cropped and reduced. The cropped version is sampled at 100 m/pixel and is centered at the north pole. The reduced resolution version is sampled at ~560 m/pixel to enable the entire WAC image out to 80°N to be displayed within a 1080x1080 pixel area. 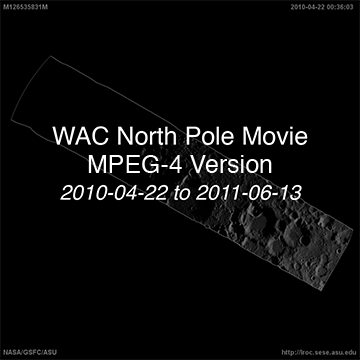 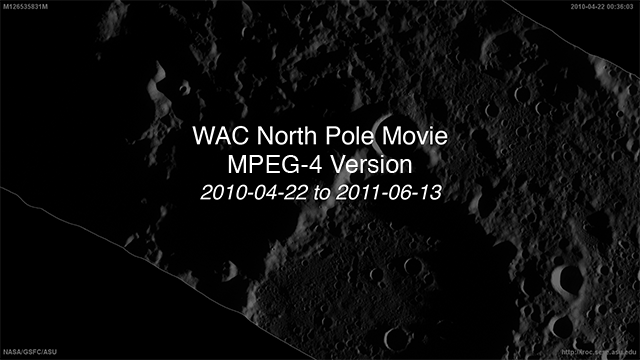 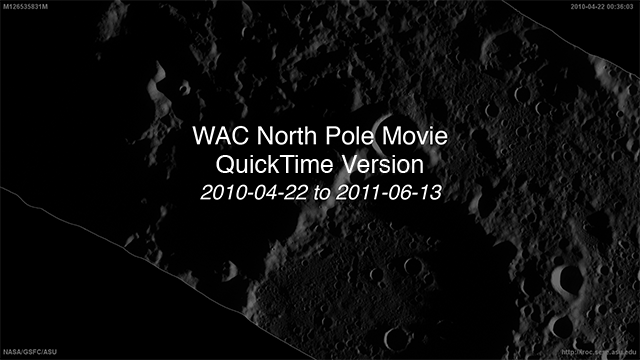 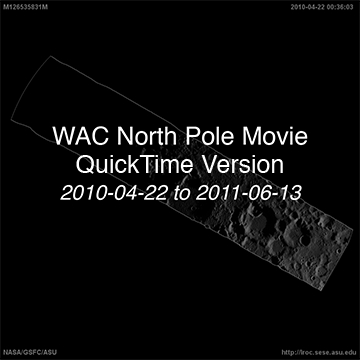